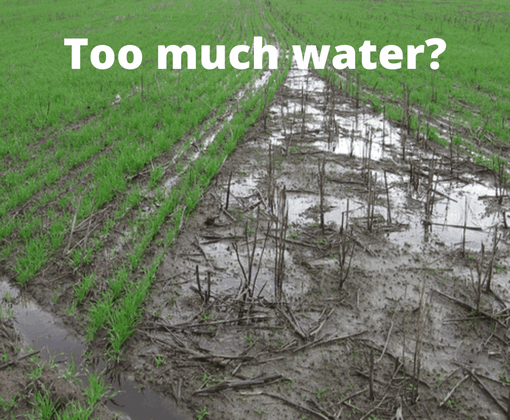 Understanding the impact of La Niña on your garden.

If you live on the eastern seaboard of Australia, thanks to La Niña you will probably have experienced some of the toughest garden growing conditions ever. Plants need water, but too much water can be just as bad as not enough water. Plants also need sunlight. In Sydney we have seen 122 days of rain so far this year compared to an average of 58 and we have received 1,920mm of rain compared to an average of 780mm. La Nina has certainly had an impact and the forecast is for this activity to continue into Spring 2022. Recent rain events have been catastrophic for many communities and commercial growers along the east coast.

Flooding is an extreme example of the devastating effects of excess rainwater. However, many gardens have struggled due to the heavy and persistent rain in areas that have not been impacted by floods. This has been due to the soil becoming waterlogged. To understand what is occurring here, it is important to understand how water moves through soil.

There are 3 types of soil water.

Healthy Soil is the Aim

Healthy soils breathe because they support living organisms that take in oxygen and give off carbon dioxide. Waterlogged soil is characterized by a lack of oxygen due to water occupying the pore spaces. The underground roots of plants need oxygen for respiration, as do soils themselves. Soil respiration, or the release of CO2 from the soil surface, is a good indicator of soil health. As a rule, soil respiration increases as the level of soil water increases. Since the pore spaces in the soil are occupied by water and oxygen, when the moisture level rises, the opposite occurs to the oxygen level. The ideal level of soil moisture is ‘field capacity’, which occurs when 60% of the pore spaces are filled with water.

Wicking beds help maintain field capacity and provide a consistent level of soil moisture. Anaerobic conditions, which occur when soils become waterlogged, are characterized by a soil moisture content above 80%. Refer diagram below. 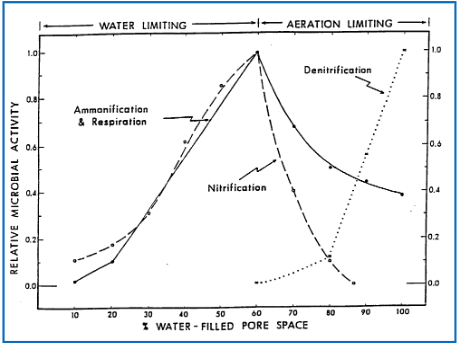 Waterlogging reduces oxygen levels near the plant root zone and the soil can become anaerobic. Anaerobic soil is easily identifiable by its rotten, sulfurous smell. Waterlogged soils give off increased levels of nitrous oxide (N2O], which not only releases harmful greenhouse gas, but also reduces the nitrogen levels in the soil. This is the reason why nitrogen is often added to waterlogged soil.

A popular myth about wicking beds is that they only perform better in dry times and that they are mainly used to save water. However, we have recently received several comments from our customers who have been amazed at how well their beds have been performing in the La Nina environment that we have been experiencing. This is not that surprising to us at WaterUps.

The advantage of WaterUps in La Nina

From years of testing and experience we know that during and after rain events the gravitational water will move down through the soil and the perforations in the top of our wicking cells and fill the water reservoir below. A correctly installed overflow pipe system will then ensure that the rainwater is expelled once the reservoir is full. Even in times of persistent and heavy rain, the moisture level in the soil is maintained without it becoming waterlogged, unlike many non-wicking beds.

Wicking beds not only save water and reduce the frequency of watering but are also important in soil health by helping maintain a consistent level of soil moisture.

Perfect for large custom wicking beds for bigger garden beds. Like every WaterUps system, save 80% of watering costs.