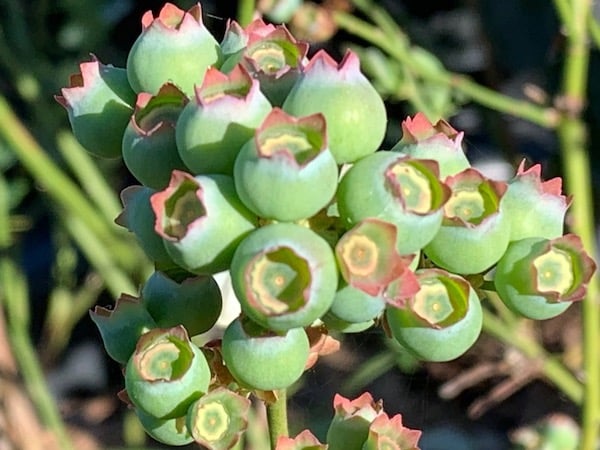 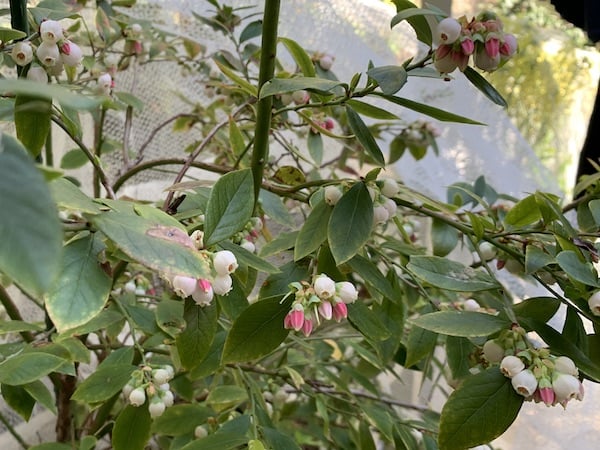 This month we look at growing blueberries, some basic concepts in hydrology and the use of wicking systems for small scale blueberry growing. I had planned to write in a bit more detail about capillary action and the process of transpiration in plants in this month’s blog. That was until I noticed how well the blueberries were going. Last year I thought that I would get a great crop from the wicking bed that I had planted, however, the local fauna dined on them well before I thought they were ready! A lesson learned and a few preventive measures seem to be doing the trick this year.

I have tried growing many different varieties of vegetables and herbs in my wicking beds and most do really well, particularly those that like a reasonably constant level of moisture in the soil, the most obvious being tomatoes and leafy greens. Over the last 3 years I have also trial planted avocados, citrus, pomegranates, grapes, passionfruit, raspberries and blueberries and tested different soil depths and soil mixes. Even though they won’t be due to harvest until at least early summer, as of this week, which marked the beginning of spring, the blueberries seem to be progressing particularly well here in Sydney. At our research farm at Billinudgel the blueberries are also doing fantastically in their wicking bed. I reflected again on Julius Sumner Miller, and my favourite childhood TV show [see last month’s blog], and wondered “why is it so” and how might capillary action and transpiration be playing a role in the growing of my blueberries?

Blueberries are actually part of the Azalea family and are a native fruit of North America. They require reasonably similar growing conditions to Azaleas.  They have a reasonably shallow root system of 20 to 30cms and can be very susceptible to water stress. In commercial growing conditions they require regular watering and weekly fertilizing, which is generally done by fertigation, ie. via the irrigation system. It is worth noting that in the commercial cultivation of blueberries, micro sprinklers are not recommended and most irrigation of commercial blueberries in Australia is done by sub-soil drippers. The soil mounds, however, have to be constantly monitored for soil moisture.

Blueberries should be ideal for wicking beds

Because they are shallow rooting, blueberries generally require more water than most fruiting plants. Rather than maintaining surface moisture, and therefore suffer evaporation loss, blueberries respond best to deep watering and a constant level of moisture. Theoretically, then, this should make them ideal for wicking beds.

For the blueberry farmer, regular testing of the ‘readily available water’ (RAW) in the root zone is critical as this determines when and how much irrigation water is required. The Department of Primary Industry estimate that a mature blueberry plant requires at least 4 litres of water per day in summer and 1 litre per day in winter. The volume of RAW stored in the root zone is largely a function of soil texture and, when it is used, rainfall or irrigation is needed to refill the pore spaces.

A reduction in a plant’s available water is caused by evapotranspiration, the two main contributors to which are:

Evapotranspiration varies by location and climate, and is measured daily by the Bureau of Meteorology at a large number of locations across Australia. Logically, it is higher in hot dry locations. Horticulturalists generally use tensiometers buried in the soil to accurately measure the available water, which is measured in units of pressure, or kilopascals (kPa). As the water leaves the soil through evapotranspiration, the vacuum inside the tensiometer tube increases and decreases as the moisture level in the soil increases. A dry soil has a kPa of >-1000 and a saturated soil has a kPa of 0. The optimal level is termed the ‘Field Capacity’ (FC), which is probably most simply described as the amount of water that a well drained soil will hold against gravitational forces and is probably the upper limit of available water for plants.

Even for the home gardener it is important to note that a plant’s available water is influenced by the following factors:-

Horticulturalists constantly monitor soil moisture and try to maintain it between field capacity and their nominated refilling point. For both wicking and non-wicking beds, the properties of your soil, particularly texture and pore space, determine its water holding capacity and the movement of water through the soil.

While soil texture and structure are very important in maintaining soil moisture, so too is mulching. Over the last few years of field research using our wicking beds, we have found that maintaining a good layer of mulch on top of the soil mix is very important. This is becomes even more critical during sustained periods of hot weather. The efficiency of the various methods of mulching and the materials used can, however, vary markedly – maybe the subject of another blog. Some mulches are effective in insulating the soil from heat and water loss, but are not great at holding water and can exhibit hydrophobic tendencies. A mulch like mushroom compost, particularly when combined with lucerne, sugar cane or tea tree mulch in our experience can increase the penetration of water in lighter rain events as well as being very beneficial for the soil. We recommend this generally for our wicking beds, however, be careful not to use too much mushroom compost with your blueberries as it can tend to be alkaline. Some pine needles will help to reduce the pH.

The great thing about growing your blueberries in a wicking bed is that you don’t have to worry about all of the soil moisture testing and monitoring. Look after the soil and check the water level in your reservoir and the pH of your soil periodically. To really give your blueberries a boost we suggest applying worm teas and other natural plant food products such as seaweed and fish extracts, particularly as your plants start fruiting.

In the meantime capillary action is looking after my blueberries.