What to do in your wicking bed this month 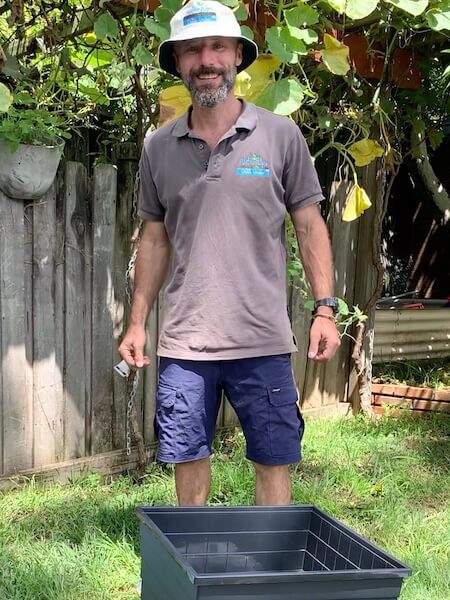 How long can I go between filling my reservoir in my WaterUps® wicking planters? It all depends on what’s in it.  I have been growing two tomatoes in a Square Planter that I planted on Sept 1 2021. I wrote this on Oct 25 2021, so for nine weeks I have been watching them grow. When the seedlings were first planted out, they only measured 10cm tall. Today they stand 1.4m tall and have already about 50 fruit between the two plants.

What have I done, and when, to get these tomatoes growing so well?

On the day of planting the plants were watered in, and the reservoir was filled. Each week, I would apply 3lt of half strength organic liquid fertiliser. With no rain, the reservoir, including the 12lt I had added to it needed to be refilled after four weeks on the Sept 25th. By this time, the two tomatoes had grown to 80cm tall with a spread of leaves of 60cm. Small fruit was starting to develop on the lower cymose inflorescences (determinate flower stems). Eight fruit ranging in size from a match head to the size of a marble were now visible, with another 12 or so flowers in various stages of development. All the lateral buds (side shoots) were removed forcing the plant to grow straight up, giving plenty of space and light to the fruit.

Knowing that the Square planter was now supporting a much bigger plant with not only leaves, but fruit that is mostly water, I started to check to water level in the reservoir on a weekly basis. I was still adding 12 lt of liquid fertiliser a month, but the water level was dropping much faster than when the plants were juvenile. Still with very little rain fall, it was noted that the reservoir needed to be refilled after only three weeks. This took the plants up until Oct 18th.

The plants were now 1.2m tall and between both plants were supporting about 30 fruit, ranging from tennis ball sized fruit all the way down to match head size. Now after only 7 days, with once again not much rain, the reservoir only has 3.5cm of water left in it (1/3 full), meaning that at this rate, the water in the reservoir will need to be topped up again by the Oct 27th, only giving a week to a week and a half of water supply. In only a few days, the amount of fruit in the two plants has grown to over 40 fruit.

With the big plants and the very heavy fruiting, the Square planter will need to be checked and possibly filled every week to ensure to fruit continues to develop and the plant is not put under stress. With Oxheart tomatoes weighing up to 1kg each, and a tomato is 95% water, it stands to reason that more water than usual is needed to fuel the plant and supply the fruit. Based on the amount of flowers on the two plants, I will be expecting upwards of 100 fruit. If each fruit weighs 1/2kg on average, then the fruit alone will be storing 50lt of water from the reservoir.

Growing tomatoes in the Square Planter has shown me two things that I did not expect to see. Firstly, the amazing growth that can be expected from a highly productive plant with unlimited water supply, and secondly, how much water a tomato plant needs to succeed. Even though the reservoir has been emptying much faster than expected compared to other plants, I have still never had success like this growing tomatoes. I believe that growing food in healthy soil should always be done instead of hydroponics when possible. The reasons for the huge take up in commercial  hydroponic farming are many, but in the case of tomatoes, the main driver is the requirement for a constant water supply. Tomatoes suffer so much from inconsistent watering and thrive, staying highly productive, over a 8 – 11 month period when well watered and feed. The Square Planter not only supplies consistent water, but also benefits the plant with important natural nutrients derived from an organic source. The nutrients drawn from the soil.

So what have we learnt? Whilst growing huge plants in a Square Planter is not only easy and will give you great success, you must be mindful of what you are asking from the soil. The water requirements on large plants is big and the reservoir may need to be topped up as much as weekly. The nutritional requirements of the plants are also heavy and a liquid fertiliser must be added as the soil will quickly be depleted of nutrients. By keeping a regular eye on the water level and having a strict fertilising regime, the Square Planter will amaze you at what a single planter can produce in a small space.